In Sevilla flamenco can literally be found in the streets. Here, I can step out of my house and find guitarists playing bulerías on a terrace or I can join an improvised flamenco party in one of the antique little bars.
-reporting from Sevilla, Spain 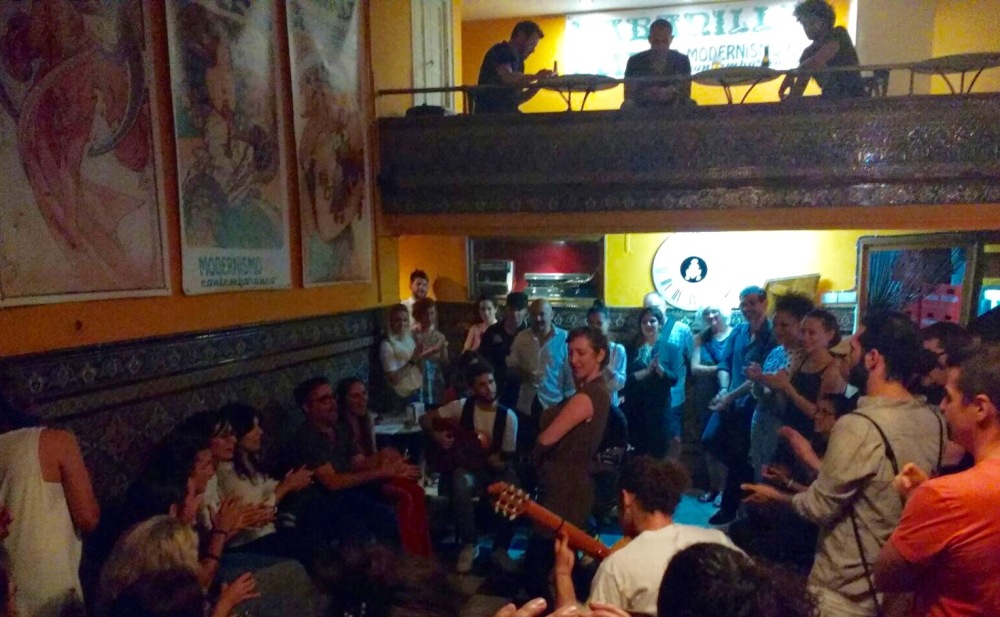 A flamenco fiesta in bar ‘La Habanilla’, Sevilla. That’s me in the middle, having finally found the guts to enter the circle of ‘flamencos’.

On Mondays usually a flamenco party called juerga or fiesta takes place at bar ‘La Habanilla’ at the end of the Alameda de Hércules square. Here you get to see flamenco in the festive bulería-style. Its exhilarating rhythm in twelve counts gets my heart pumping every time.

Joining in on a circle of flamencos to dance is always a nerve-wracking situation for me, but at the same time one of the things I love most about flamenco. To an outsider it may look as if everyone is improvising and just having some fun. Of course this is true, but underneath lies years of practice and understanding of the flamenco ‘grammar’ that makes it possible to communicate instantaneously.

Also, these fiestas are often private and only friends of the artists are welcome to join. So it is a rare occasion for me as a guiri (foreigner) to get the chance to dance with flamencos.

A bulerías party with flamenco phenomenons like ‘La Paquera de Jerez’ and ‘El Torta’ singing. From the movie ‘Flamenco’ by Carlos Saura.

As one of the most festive styles of flamenco, bulerías developed from being a song for dance accompaniment, to a proper flamenco style of its own. It provokes a lascivous, humoristic way of dancing, which I very much enjoy, because it allows for joking around with coy movements of shoulders or hips while the singer follows the dancer all the way to the end. This festive style of flamenco is probably called bulerías, because it refers to this burlesque character.

Bulerías on the beat

According to flamenco experts, singer Loco Mateo from Jerez was probably the first, in 1870, to end the serious and heavy flamenco style called soleá with a more lighthearted feel, doubling the pace, like a modern day bulería. Others say bulerías originated from the chuflas, serving as the ending of the cantiñas (and later alegrías) from Cádiz.

In either of the cases the old Andalusian musical styles called jaleos would be the source of bulerías. Jaleo also happens to indicate the typical shouting and clapping flamencos use during a fiesta to express encouragement towards the artist, and engagement in his or her performance. So if you ever want to be able to join a party like this, you will have to master its magical compás (rhythm) first and make it your own, like a heart beat.