Spanish artist Salvador Dalí was famous for his surrealistic works of art, but did you know he also took a shot at flamenco action painting? Original film footage lets us join the party.

Salvador Dalí was the first to improvise a painting live on stage accompanied by flamenco artists.

At the opening of New York’s Gallery of Modern Art in 1965 Dalí paints a horse and rider to the flamenco sounds of guitarist Manitas de Plata and singer José Reyes, founding father of the world famous band ‘The Gipsy Kings’. Filmed footage of that performance is available online. Watch the video below.

Dalí painting live on stage with Manitas de Plata and José Reyes. From the documentary ‘Dalí in New York’ by Jack Bond in 1965. Source: www.manitasdeplata.fr.

Flamenco action painting is a recent phenomenon, or so I thought. Until my friend and flamenco painter Patricio Hidalgo showed me this rare film footage of Salvador Dalí (1904-1989) performing live, together with two famous flamenco artists on stage: guitarist Manitas de Plata and his cousin, singer Jose Reyes, who were both fathers of the artists that started the band ‘The Gypsy Kings‘.

Dalí is painting a rider on horseback, probably Don Quijote de la Mancha, while interacting with the musicians. He tries to match the rhythm and intensity of the music, not doing a very good job in my opinion though. He tries to end together with the breaks in the music several times, but does not succeed.

Dalí does not seem to be familiar with the flamenco rhythm (compás), but he makes up for it by being his usual genius of entertainment pretending to pound the beat with his ‘hooves’, comically standing up and sitting down again while holding his famous cane (min 7.34) .

Gypsy kings of the stage

Despite Dalí’s excentric behaviour on stage, guitarist Manitas de Plata holds his own. Manitas de Plata, meaning ‘little hands of silver’, was a gipsy from the south of France. He was known for socialising with famous people like Brigitte Bardot and Pablo Picasso. Manitas was criticised by some flamenco purists for his unorthodox technique and for playing only rumba, the festive ‘pop’ version of flamenco that was made famous by the Gipsy Kings.

Be that as it may, the performance I see shows quality flamenco. Together with the singer, Manitas plays difficult flamenco styles pertaining to the traditional flamenco (cante jondo) like seguiryias and tangos. They end the show with the popular rumba and Manitas even performs a little dance step (pataíta). But I think this shows that he is indeed skilled in the flamenco ways of ending a performance with a little on-stage party called ‘juerga‘.

Dali and flamenco
Dalí might not have been a flamenco artist, but he was a real flamenco fan (aficionao). He was seen several times with flamenco dancer ‘La Chunga’ (Micaela Flores Amaya), a cousin of the famous dancer Carmen Amaya.

La Chunga was from Catalunya, the same Spanish region where Dalí was born. She always danced barefoot. Dalí got her to perform on a blanc canvas with black paint on her feet as a sort of live paint-dance performance in the countryside of Port Lligat. 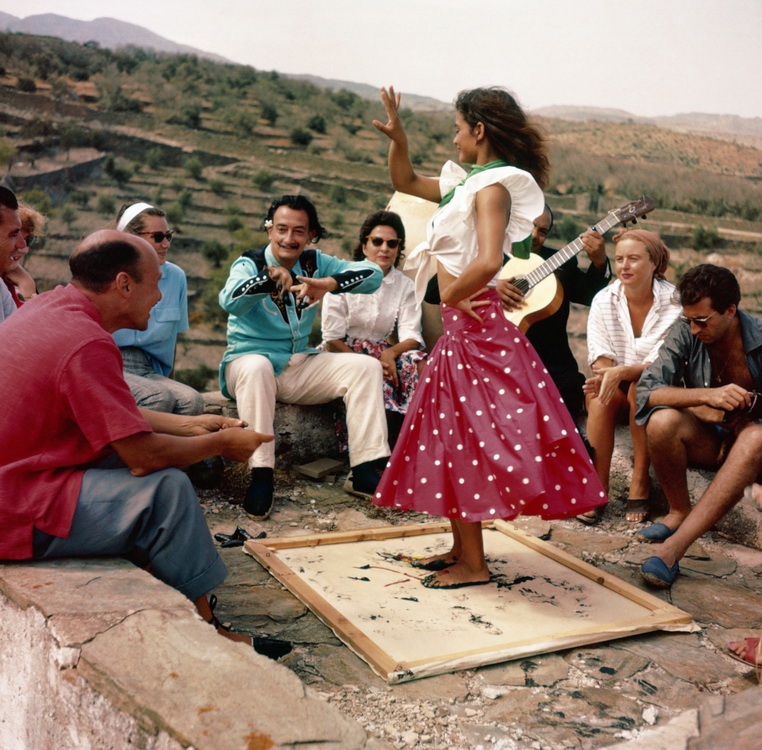 I am not sure how Dalí came into contact with flamenco, but being from Catalonia it is natural that he would have known flamenco artists from that region, like guitarist Manitas de Plata.

Dali’s Artwork on a guitar

Dalí and Manitas met on the steamer that carried them from France to New York. Manitas achieved worldwide fame after this visit to New York when photographer Lucien Clergue organised a photo exhibition about him and he released his first LP ‘Guitarra Flamenco’. He eventually performed in Carnegie Hall fourteen times.

An intriguing artistic detail I discovered is that the sketch of the horseback rider that you can see Dalí conjuring up during this New York performance has also been sketched on Manitas’ guitar. The drawing is visible on one of Manitas’ album covers (see below), but I have no idea if Dalí drew it himself. Looks like it though. I know Manitas was in the habit of letting famous artists the artwork on his guitar. He also got Pablo Picasso to sign his guitar. 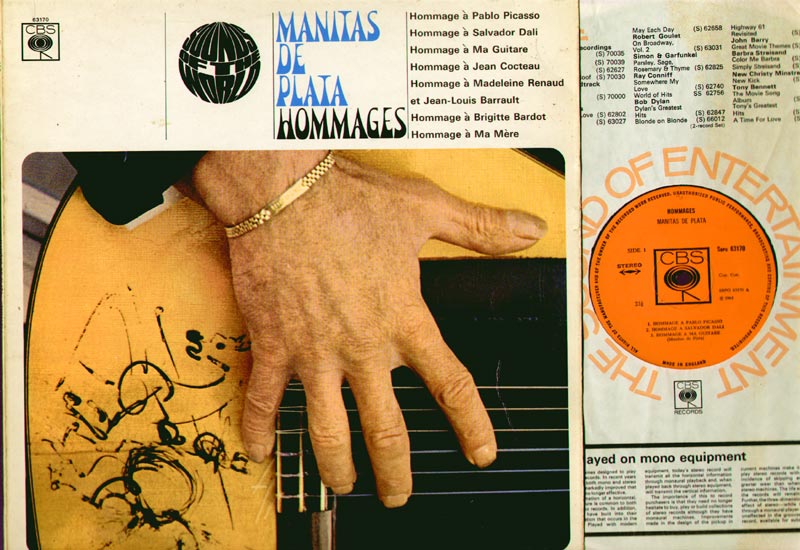 Album cover of ‘Hommages’ 1968 by Manitas de Plata showing Manitas’ guitar with a sketch on it of Don Quichote de la Mancha on horseback (probably) by Dalí. Source: prorecordingworkshop.lefora.com.

As far as live action painting accompanied by flamenco music goes, Dalí was probably the first. I do not think Dalí contributed a great deal to the flamenco itself though. Contemporary flamenco action painting has grown a lot in that sense. Nowadays there are live action painters like Patricio Hidalgo, who are very knowledgeable about the art of flamenco and use their craft to translate the emotion, imagery and rhythm of the flamenco ‘language’ into visual forms of expression.