A ‘muse’ is what the ancient Greeks called the feminine deities that inspired artists. And they have been generous with their gift of inspiration in the case of Musa, a show by María Marín and Irene Álvarez that combines several of the arts with the classical Spanish guitar and flamenco dance in the lead.

María Marín is a Spanish classical guitarist and sings flamenco. Irene Álvarez is a flamenco dancer with a background in classical Spanish dance. According to these two gifted women the muse (musa) is secretive, sensual, powerful and inspirational. Their show Musa supposedly gives a feminine vision on art. It is an ode to female guitarists and flamenco dancers throughout the history who’s skills were versatile, and to their own mothers who passed on tradition to them. Also these women think that different arts should be combined when performing. So guitar playing, paintings, dance, song and acting all play their part in this show.

Musa starts off with a serene atmosphere, like the painting that is projected in the background: a woman in a white silk dress holding her guitar, ready to play, while another young women is painting her on a big canvas. María Marín walks into the spotlight in a similar gorgeous dress and transports the serene atmosphere of the painted homely scene onto the stage before us.

Marín’s pieces on guitar by Dionisio Aguado and Miguel Llobet draw us right into the intimate atmosphere of 19th century chamber music. Álvarez shows a great aptitude for classical Spanish dance, especially in her use of the castanets. Antonio Lauro’s ‘Venezuelan waltzes’ bring a Latin-American sound with them and the dance with a fan that Irene Álvarez performs takes the air of a flamenco style from Cuba called guajira, thus weaving both musical worlds together. On the sound of the ocean Álvarez sweeps her white, long tailed dress (bata de cola) and drags the waves right onto the warm, sunny beach that she pretends to tread with her bare feet. The only thing missing to make the scene into a sugar coated Victorian painting is a perky little parasol.

Spanish folklore in the living room

Marín and Álvarez surprise the audience when they start talking like two Andalusian women visiting each other in one of their living rooms. They manage to create a comfortable atmosphere, making the audience feel at home with them, as if they get to take a peek in a real Andalusian household like the ones they grew up in. They sing folklore songs to each other by Federico García Lorca, the ones their mothers taught them.

The serene atmosphere of the first part changes into a more vivid and rhythmical second part of the show.  Marín accompanies Álvarez’ dancing with a guitar theme by modern composer of flamenco and classical guitar Feliu Gasull and makes it sound like a real flamenco bulería (festive flamenco style with 12 beats). Although in the classical pieces Álvarez dances marvellously, this is the moment when real chemistry between guitar and dance finally unfolds itself. That is probably because this guitar piece was adapted to fit the dance rather than the other way around or because Feliu is also a flamenco guitarist.

Flamenco in the museum

When María Marín sings and plays the flamenco song called ‘Triniá’ (by Salvador Valverde et al.), she sings about an artist who visits the museum in Seville and looks at the paintings of Murillo and Raphael. When he sees the girl Triniá he paints her portrait. He is so mesmerised by her that he doesn’t need to visit the museum anymore, he has all the beauty he needs right in front of him. Until Triniá runs off with a very rich gentleman and leaves the painter behind, disillusioned and with an unfinished portrait. The projected painting on the background screen makes this scene complete. 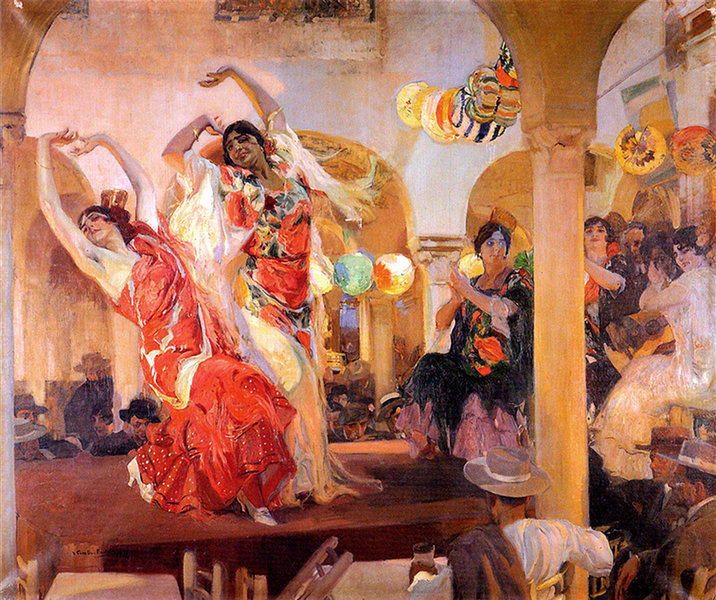 Musa ends with ‘Sevilla’ by Albéniz and a painting by Joaquín Sorolla. It is a perfect ending, seeing as Marin and Alvarez are both from the province of Seville and Albéniz is part of the most treasured classical heritage of Spain.

All together this show makes for a complete immersion in all the classical arts of Spain: classical guitar, folklore and flamenco singing, classical Spanish dance, flamenco dance and fine art. Accompanied by paintings that depict Spanish women playing the guitar, singing and dancing and who were like these two women: allround artists.

For the making of Musa and an interview with the artists watch this video: